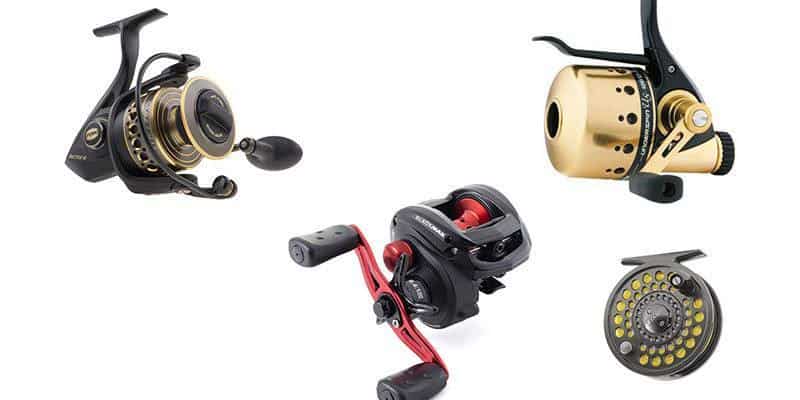 The best fishing reels will always be made from high quality materials regardless of what kind of reel it is.

The type of reel that you choose will be determined by what kind of fishing you intend on doing.

However there is some overlap between the different types.

The spincast reel is the easiest reel to use, which is why often times you will see children or adults who are new to the hobby using them.

These tend to be looked at as introductory reels that can get the job done.

All you have to do is press a button and flick your wrist in the direction you want the lure to go, and that’s it. The mechanics of the reel is simple and it doesn’t take a whole lot of effort—or money.

Be mindful that because they are intended for beginners, the spool is going to be shallow and best suited for lighter lines.

These types of reels are not really capable of fighting against a large or more powerful fish as the they are generally built with a low quality drag.

The spinning reel is going to be the most popular type of reel you’ll find anglers using today. They have an array of uses and there are numerous selections to choose from.

There are so many options, any angler would be able to find a reel that is going to work for them on the regular basis.

With these reels, they are going to be on the bottom of the rod instead of the top like the spincast reels.

You’ll find that with these reels, you’re going to have more control and they are going to be built much more solidly than the spincast.

Some would consider these to be the best surf fishing reel, especially if you’re hoping to catch medium sized ocean fish.

A spinning reel is a step up in performance from a spincast reel.

They are available in a large range of sizes from ultralight sized 1000 up to a massive 13000 that is capable of handling some very large saltwater species.

In a size 4000 they also make a pretty decent catfshing reel but for larger cats I would stick with a baitcaster.

They are easier to cast than a baitcaster and are also not prone to birdnesting.

These reels are among the most advanced reels on the market. They’re also known as a conventional reel and they’ve been around for quite a long time.

This is going to be your go to reel if you’ve mastered the other designs and you want to go after the larger, stronger fish.

The spool is capable of handling heavier types of line, which is going to be necessary if you want to catch the big fish. Keep in mind that because these are heavy duty reels, you don’t want to use light tackle because it will not pull the line sufficiently, thus limiting your casting range.

A good Baitcasting rod and reel combination will have exceptional casting abilities and will generally perform better than a spinning reel at casting medium to heavy lures.

The trolling reel is similar to a baitcasting reel.

They’re designed the same way, but they aren’t intended for casting.

They’re used for large game fish like catfish, lake trout and even large ocean fish like the marlins.

Before you choose what kind of reel you purchase, you ​first must know what type of rod,  what type of fish you’re hoping to catch, where you’re going to be fishing, and your skill level.

You don’t want to take a spincast reel out on a fishing trip if you’re hoping to catch a prized trout or a marlin.

There are two types available a level-wind, and a traditional one.

The level wind will move the line back and forth over the spool so that it is laid down evenly.

The more conventional type will not and you have to use your thumb to help guide it so it lays on the spool in an even manner.