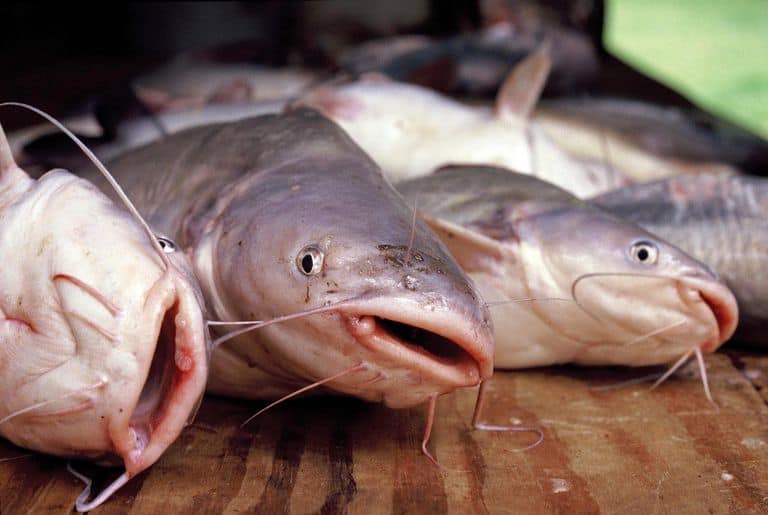 The three primary types of catfish found in the United States are the blue catfish, the channel catfish, and the flathead catfish.

They live in lakes, rivers, and reservoirs throughout the country. They are considered the “big three” and they are the ones that are most desired by anglers.

Although all three are catfish, they vary in their characteristics, their looks, and their behaviors. Read on to learn about each type and how they differ from one another.

The scientific name, Ictalurus, is Greek for “fish cat” and furcatus is Latin for “forked,” which refers to the fish’s forked tail.

The blue catfish is usually a slate blue color on its back with a white belly. They do not have spots.

The blue catfish and the channel catfish have very similar spawning cycles. They are able to reproduce when they reach 24 inches in length.

Blue catfish grow to between 20 and 40 pounds and some can reach weights of over 100 pounds. They never stop growing so the size of the fish will help to determine its age.

They normally live in large rivers, especially in the main channels and tributaries of these large rivers. They will travel upstream to escape the heat in summer and downstream to find warmer waters in the winter.

Blue catfish are found in Ohio, Missouri, and Mississippi. They can also be found in Texas, Mexico, and Northern Guatemala.

They are usually in larger rivers. When you find a mature population, you will find blue catfish as big as 50 pounds. It is one of the largest species of North American catfish.

When they breed, the male creates the nest and the female lays the eggs. They are monogamous during mating season.

The male will guard the eggs and stay with the fry after they are born for about a week. After that, they swim off on their own.

Blue catfish are considered predators and scavengers. They eat anything they find that they like. They can live to between 20 and 30 years and they are fast growers.

The channel catfish (Ictalurus punctatus) has a scientific name that comes from Ictalurus, which is Greek for fish cat, and punctatus, which is Latin for spotted. They are olive brown to slate in color and they have shades of blue and gray on the sides.

Their bellies are silvery white and they usually have small black spots all over them. This helps to distinguish them from the blue catfish.

In addition, their tails have a deep fork, which helps to set them apart. The upper jaw protrudes, which is different from the flathead catfish whose lower jaw protrudes.

The channel catfish spawn in the late spring. They wait until the water reaches 75 degrees. As with the blue catfish, the males select the nest. They find a dark, secluded area and the female lays the eggs.

The male stays and guards the nest and it has been known to eat some of the eggs if there is danger nearby.

The young channel catfish usually feed on small insects until they are about four inches long.

The adults are omnivores and they eat crustaceans, fish, mussels, insects, and plants. They are able to reproduce when they are twelve inches long, which is at approximately three to six years old.

They live in lakes, large streams, rivers, and reservoirs that have low currents.

The channel catfish is one of the most popular fish in the United States. They are found in many locations and they are great to eat.

The only type of fish that is more popular is bass. Anglers use different tactics and their is a long list of catfish baits to choose from such as punch baits, soap baits, and dip baits to catch them.

The flathead catfish (Pylodictis olivaris) is also known as the yellow cat, opelousa catfish, opp, appaloosa catfish, pied cat, and shovelhead cat. Pylodictis is Greek for “mud fish” and olivaris is Latin for “olive colored.” They are usually dark olive to yellow in color and the belly is pale yellow or white. The young are usually brown.

They have a flat head and a protruding lower jaw, which helps in telling them apart from other species. Some people call them shovelhead fish because they look as if the head was flattened with a shovel.

As with the other catfish, they have smooth skin and whiskers around their mouth. The tail fin is not forked the way that it is on the blue and channel catfish.

While the blue catfish and the channel catfish are scavengers, the flathead catfish only eats live fish. They mate between May and August and they prefer the water to be between 75 and 85 degrees.

As with the other types of catfish, the males choose the nesting site and the females lay the eggs. The male will often make the nest safe by digging in the mud or finding hidden places.

The young flathead catfish eat crayfish, invertebrates, and worms. As they grow, they shift to a fish-only diet. They will also eat other catfish.

As adults, flathead catfish like to be alone. They will choose a spot and remain alone in the deep water. They travel to shallow waters during the night to find food. They prefer to live in deep pools with cloudy water and very slow currents.

The flathead catfish is different from the blue catfish and the channel catfish. It has the protruding lower jaw, a distinct flat head, and, most importantly, it is a different color. Its olive to yellow coloring leads anglers to call it a yellow cat, among other names.

The blue catfish and the channel catfish can be harder to distinguish. Both can be a slate blue color but they do have distinct differences.

The blue catfish has a slate blue back that fades to a while belly. It doesn’t have any spots. The channel catfish has olive brown to grey coloring but it often does have spots. However, as they grow to be large, they can lose the spots.