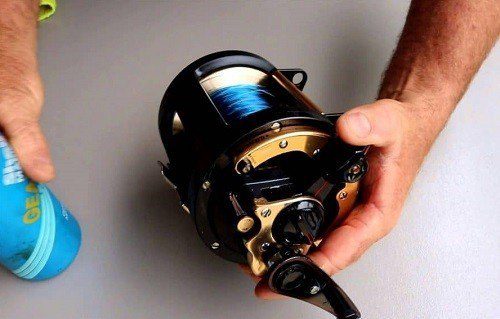 To go trolling, you will use lines with hook-rigged lures that are dragged behind the boat to lure the fish to bite.

Trolling reels are designed to give you the most versatility in terms of fishing line options. If you prefer to fish in fresh water, you’ll want to use a monofilament and lead core to catch fish like walleyes and salmon. A saltwater troller will want to use a wire line that is made from stainless steel, titanium, or a combo of metal alloys that will prevent fish with teeth from cutting the line.

In this guide, we want to share with you our top three trolling reels. In these mini reviews, we will provide you with a breakdown of the reels features and a general summary of what customers had to say about their experience with the reel.

Then we are going to provide you with what to look for when shopping for the best trolling reel, so that it will meet your needs and perform efficiently and well.

Let’s take a look at the top 3 best trolling reels.

Penn is known for bringing anglers top quality reels and the Penn Squall Level Wind Reel is just one example of the fine craftsmanship you can expect from the Penn company. The reel features bronze gears with a stainless steel pinion that is responsible for greatly reducing corrosion.

Although this is a mid-range Penn reel, it rivals higher end reels. Left handed anglers aren’t left out, as you can purchase a left handed version of this reel as well. Notable features of the Penn Squall Level Wind Reel include:

The drag stack uses 3 carbon fiber drag washers that are backed by two drag spin. The reel is rated at 15 pounds, but even at maximum, the drag is going to be smooth and effortless. There are two anti-reverse systems in this reel: anti-reverse bearing and a backup anti-reverse bog. Also, the gear ratio allows for fast line recovery.

When looking at what people had to say about the Penn Squall Level Wind Reel, the vast majority of consumers had wonderful things to say about their experience using this trolling reel. Customers report that they were able to reel in large fish like 80 pound tunas and mahi.

They go on to say that that you can fish for deep water fish like sheepshead, ling cod, and rock cod and this reel makes retrieving the line easy. One customer said that they were able to pull an 18 pound snapper from 150 deep and the reel worked perfectly.

While there were an overwhelming amount of positive reviews for the Penn trolling reels, there were some people who were disappointed in them. These customers felt that the design was poorly done. One customer said that sand can get into the reel causing the unit to not work properly.

Another said that the guide on their reel stopped working only after using it for five fishing trips. Others reported that they were disappointed to see plastic gears in their reel.

Inside the Okuma trolling reels, you’ll find a series of heavy-duty machine cut brass gears, a dual anti-reverse system, and a complete carbonite drag system. All of this is held inside the reel with the Okuma Mechanical Stabilization System. Notable features of the Okuma Cold Water Line Counter Trolling Reel include:

When looking at what people had to say about the Okuma Cold Water Line Counter Trolling Reel, they had great things to say. Customers who are left handed like that there are several options for them to choose from. Customers have reported that they like that this reel has a smooth drag that is comparable to more expensive salt water trolling reels, without that high price tag.

People have said that the reel feels comfortable in the hand and that it works really well – saying the line counter is especially useful because they have better control of their lure depths.

Other customers were not as impressed with these trolling reels and they left critical reviews. Several people were disappointed that while the reel has the clear view window with the anti-fog treatments, they still experienced excess condensation which made it difficult to see the line.

Some said that the line counter on their reel had a tendency to get stuck, which was a nuisance that they hadn’t anticipated. Others said that the reel was bigger and bulkier than they had expected.

The Okuma Magda Pro Line Counter Level Wind Trolling Reel is a versatile fishing reel that features a several different models within the line that are great for left handed and right handed people alike.

The reel is made from stainless steel that also has reinforced side plate rings. The reel also comes with a mechanical line counter function that will measure (in feet) the line, but you can also press a rubber button to reset. Notable features of the Okuma Magda Pro Line Counter Level Wind Trolling Reel include:

The trolling reel is made up of durable, self-lubricating brass gears. The carbonite drag system displaces the heat and friction by consistently provides a wider and smoother drag range, making it a great option for those who are looking for a lightweight (and affordable) reel when you go fishing for walleye, lake trout, steel head, and even salmon.

When looking at what people had to say about the Okuma Magda Pro Line Counter Level Wind Trolling Reel, they had great things to say. Of these positive trolling reels reviews, customers were most impressed by how well the reel performs.

They like that the reel is durable and it consistently is smooth when they are reeling in. Several people have said that they like the auto-flip on the spool that will latch instead of having to do it manually.

Though there were a lot of customers who were very happy with this reel, there were a few who were not as impressed with the way the reel worked. There were a few people who reported that their reel didn’t last as long as they had liked – one stated that even after rinsing the salt water away with fresh, the gears rusted.

Features To Look For In The Best Trolling Reel

While you’re looking for your next trolling reel, here are some of the features that you’ll want to look at before you make your purchase:

There are three types of materials used in the construction of the body. They can be made from:

Graphite – Graphite isn’t going to be very strong in terms of construction, but they will be more affordable and they are going to be lightweight.

Aluminum Frame – An aluminum frame is going to give you a stronger reel and it is a higher quality material.

Machined Aluminum – A reel made from a solid block of aluminum is going to be the best because they are more rigid, they hold bearings and gears in alignment, which prolongs the life of your reel.

A clicker is going to be useful because it provides you with an audible signal that lets you know the line is completely out. You want to make sure the clicker is loud enough for you to hear over the noise from the boat, wildlife, and your chatty fishing partner.

The drag is designed to absorb the energy from a fish fighting against you. It is important that the reel has a smooth drag so that it can adjust quickly and easily to the differences in depth and distance. An efficient drag will be able to bring up a larger fish – even if it wants to fight you the entire way.

When you fish in salt water, you may want to think about getting a dual speed reel. These reels are going to be able to fight against large fish like marlin and tuna. All you’ll need to do is flick a lever and you’ll be able to take up line quickly when your fish charges the boat.

Line capacity is an issue when you are fishing for something that can strip a spool. Depending on the type of line you want to use, you may need a reel that is larger (such as for a lead core line) or smaller (if you are going to use a monofilament or braided line).

A line counter can either be manual or electronic and they are used to help anglers get the same line depth for each drop. This is extremely helpful because you don’t have to guess when you drop your line. For example, instead of counting in your head after each time you drop your line – the counter will do that for you.

A line guide is going to be important because it will make sure when you drop the line, it drops smoothly into the water. The line needs to be steady when it is being reeled in so that it doesn’t tangle or break. Look for reels with a solid line guide construction because it will balance tension and the wind to make reeling in larger fish easier.

Of all the trolling reels for sale, to say which is the best trolling reel really depends on what you’re looking for. We believe that any of these three reels are worthy of your consideration. However, the Penn trolling reels edged out the other two only by a little, simply because it had many more positive reviews.