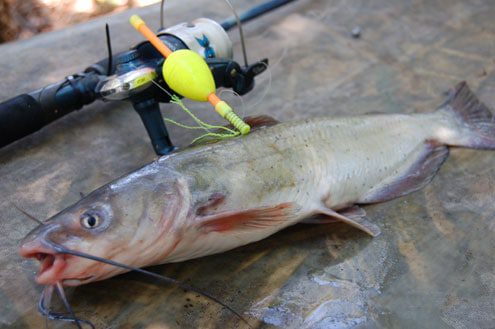 ​Of all of the species of fish that you can catch on a rod and line the types of bait for catfish is almost endless.

You can literally take stuff out of your fridge or food cupboard and throw it at them.

The best catfish bait will always  either have some form of smell to it or be a natural food that they are used eating regularly from their natural environment.

That being said you can even catch them on hot dogs ​or even a piece of soap.

​Whilst most other species require you to 'match the hatch' i.e present them with something from their natural diet, catfish are opportunistic eaters and they will smell a good meal from a long way away.

Being a bottom feeder most catfish baits will be presented on a rig generally using a circle hook.

That bait can be fished on the bottom or suspended a foot or so off the bottom using a float rig.

​Each species of catfish will have their favorites and many anglers will tell you that you what works for blue catfish won't work for channel cats.

Personally I think it is all about location and size.

Larger cats will rarely take a small worm but put a big live bait or a freshly killed dead bait in front of them and you have a pretty good chances of a bite.

​Armed with the right catfish pole and a high quality catfish reel all you need is a good bait and you are on the way to catching.

Shad are one of the most sought after food source for any large predator where shad are naturally occurring in large numbers.

​Catfish both big and small love them and you can either catch them yourself or buy them from a bait and tackle store.

Channel cats love them and they make up a very large portion of their diet.

They can be used as either live bait, whole dead bait or as cut strips.

Cutting them helps to release a lot of their natural oils and scent and in murky waters this approach can be much more productive as catfish will have to rely on their sense of smell more.

​Purpose made punch bait pack a mean 'punch' in the smell department and catfish seemly go absolutely wild for it.

Lots of anglers will make their own and guard their recipe with their life.

You can buy it ready made in large tubs and the store bought stuff works a treat.

Chicken livers have long been known as one of the best baits for catfish.

Again they are all about smell and livers have a very meaty smell that cats find irresistible.

They work great for channel cats and smaller blues and flatheads.

They are fairly cheap and readily available from your local grocery store or from a butchers.

One thing to mention is that they are particularly soft and can have a habit of breaking off your hook whilst casting.

A good trick is to leave them out in the sun in a zip-lock bag so that they toughen up a bit.

You can also marinade them in your favorite mix for punch baits.

Nothing gets more basic than a worm on a hook.

But for catfish you really need to up the size of the worms and the number.

A treble hook with four or five big night crawlers is a great way to catch channel cats.

Fishing this way is the perfect introduction for kids as you will also get a lot of other bites from whatever fish are around.

For the serious angler however this can be annoying  so you may end up having to check your hooks every few minutes and re-bait them.

Just like shad crayfish form a large part of the catfish's natural diet and you can always rely on them if the catfish happen to be feeding on them.

You can catch your own with traps but they are usually available in all good bait shops to buy over the counter.

They are generally fished on the bottom on a light rig and I would rarely use them if casting large distances.

I prefer them for more close up work on a lighter setup so that you can feel the bite a bit more easily.

​Just like chicken livers hot dogs and spam are some of the best artificial catfish bait around.

​Virtually any processed meat is usable for catfish. The trick again is in the smell and flavor.

Processed meats have a lot of additives in terms of flavorings and this can work to your advantage in a massive way.

My personal favorite is a cheap smoked hot dog or any other sausage that has some added smokey flavoring.

Lots of anglers will soak or marinade their hotdogs in some kid of garlic rub with added spices to get even more smell out of them.