​Catfish are one of the most under-rated freshwater fish that can be caught with a rod and reel in the USA. Catfish fishing is a lot of fun and once you understand a few of the basic principles not terribly difficult either.

They are big powerful bottom feeders that pack a mean punch once hooked. Not only are the great fun to fish for but they also taste great and battered catfish in my humble opinion is probably the best deep fried fish you can ever have.

Whilst the majority of anglers spend their time fishing for bass there are a few select anglers in the know that can and do fish for catfish almost exclusively.

Catfish can be found all over the world and in the right locations with a reliable food source can grow to near gigantic proportions.

Monster catfish fishing is addictive when many anglers spending days on end working the same stretch of river where rumors of these great are said to lurk.

However, not all catfish are monsters and some of the best eating ones are actually the smaller to medium sizes. 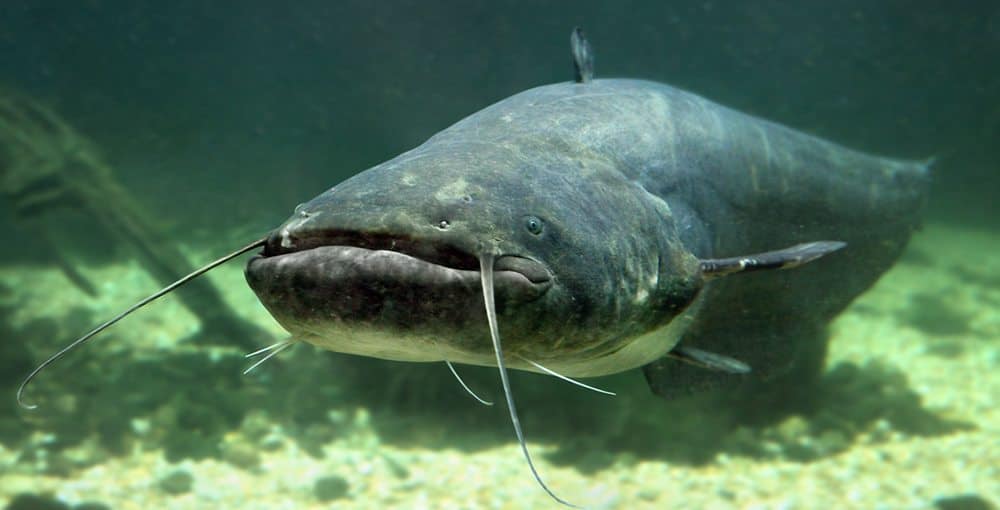 ​Catfish fishing usually entails using a scented bait on a hook utilizing a variety of rigs or floats depending on what the scenario calls for.

You will rarely find a fisherman using lures for catfish, although it is quite possible to catch them on a variety of lures, using bait is by far the most popular choice.

Tackle wise you be looking at a casting setup with a high quality monofilament as a choice of catfish line at 12 to 15 lbs for smaller channel cats up to 30 lbs for larger.

Size wise the average catfish reel will be a 5000 or higher.

Most catfish rods will be 7' in length at a minimum and the average rod will be in and around 7'6".

You can of course use a spinning rod and reel but the majority of catfish ​gear tends to be done on the best baitcaster combo that you can afford.

They can be caught from both boat and shore. However the bulk of the fishing is done from the shore on either a river bank or on the shores of a lake or pond.

Catfish are found in many different types of waters from small river to large lakes. And although they can be caught in a fast moving river I have always had the most success in the slower moving parts of a river.

During the day they will tend to stay close to cover and large under water structures. They also seem to have an affinity for murky waters.

One of the best places to target catfish is where to rivers meet. The resulting water disturbance adds a lot of color to the water that allow the catfish to feel a bit more hidden.

A night is when catfish feed best. The have an incredible sense of small and there large bards or whiskers and they are commonly referred to allow them to feel around on the river bottom in search of food.

There are lots of different baits that can be used to catch catfish and some anglers will go to great lengths to make there catfish baits as stinky as possible using all kinds of artificial food additives and even coloring.

Some fishermen will often mix quite a few of these together to make one hell of a stink, with many anglers swearing that their concoction is the ultimate catfish bait.

Catfishing does require a heavier setup than a lot of other freshwater species. Due to their size and weight a lighter spinning setup is not really the best option.

The best catfish rod and reel combo is one that is has enough backbone to handle large catfish and yet still retain decent casting performance.

A good option to go for if you are new is a good quality baitcasting reel combined with a medium power casting rod.

Although the size of the fish that you can catch will vary significantly it is best to choose your rod and reel the best suits the average size of the catfish in your local area.

You'll most probably need a rod that is rated for at least 20 lb monofilament fishing line or 45 lb braid. Each type of fishing line has it's own advantages and disadvantages.

Monofilament has a lot more stretch in it than braid. And when using circle hooks for catfish it that little extra stretch is a bonus.

The lack of stretch in braid and it's thinner diameter can be an added bonus when you are fishing near to a large weed bed or lilies. Braid can slice through vegetation much easier than mono so bear this in mind when you are selecting your line.

Graphite rods in my opinion quite simply do not have the backbone to handle a large catfish especially one that has been hooked near a large amount of cover like a big weed bed.

Once the catfish runs for the cover you are going to have a big fight on your hands and your rod and reel had better be up to the job.

Traditional e-glass rod blanks can take a hammering and I have personally witnesses these types of rods almost bend in two with out snapping under the weight.

A modern graphite rod will not tolerate that type of continual abuse regardless of how heavy it is rated.

Reels need to be capable of holding enough line to handle a large run by a catfish and also have a strong enough drag that can take a real beating.

Casting performance is also very important, you may be through some very heavy bait rigs out into deeper waters and you'll need a reel that can handle these kinds of things.